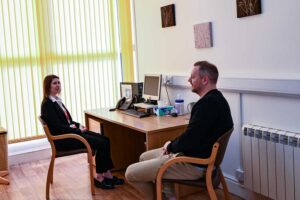 Why aren’t men talking about their mental health?
There are many reasons why men are often more reluctant to talk about their thoughts and feelings which can include: growing up in a family or social circle that do not discuss emotions; they feel pressured to conform to cultural and societal expectations of being strong and in control; they might not recognise their own symptoms of mental ill health.

Other reasons have been reported by Prior Group (2018) from men who suggested they were embarrassed about sharing how they were feeling; they did not want to appear weak to those closest to them including partners, friends and colleagues; and they had learnt to manage their symptoms on their own.

Men are less likely to access primary care services including pharmacists or booking an appointment with their GP for any type of health concern, and this includes their mental health. Many men would not feel comfortable talking to their GP about their thoughts and feelings for the main reason of not wanting to waste anyone’s time.

Mental health symptoms in men
People will experience mental ill health differently and so symptoms will differ from person to person. Nevertheless, men can sometimes experience a mental health condition in a different way to women, with men more commonly presenting with one or more of the following signs and symptoms:

Men’s mental health at work
Recent research suggests that men are twice as likely to experience mental ill health due to their job compared to problems in their personal life. Despite this, men are less likely than women to share their concerns with their line manager or employer and are less likely to take time off due to mental ill health. This could be attributed to further findings that men feel less supported in general in their workplace – only half of men felt their manager regular checked on how they are feeling.

Many men work in industries which have a competitive, ‘macho’ culture and men feel unable to open up and be themselves. This can be particularly true within the construction industry.

Mental health in construction
It is well-known that there is an element of a ‘macho’ culture within the construction industry. This, combined with the pressures of the nature of construction work – long hours, working away from home, tight contracts – is leading to worrying numbers of men in the industry experiencing mental ill health and dying by suicide.

Men working in construction are three times more likely to die by suicide than the national average for men; current figures show over 700 men die by suicide every year.

A recent survey found that over two thirds of construction workers believe there is a stigma attached to mental health which is a major factor in preventing them from talking about it.

How can employers support men?
Education and training in the workplace across all industries is needed to help eliminate the stigma around mental health, given this is the reason why so many men are suffering and not seeking support.

Employers can ensure their health and wellbeing strategy includes mental health as a key focus and helping male staff in particular to feel encouraged to discuss any workplace or personal issues they may be facing.

Managers creating more communication on a human level by simply asking their team about how they are feeling can have a significant impact on the motivation and willingness of men being able to open up. Employers should therefore seek to invest in the development of managers to ensure they have the necessary skills and knowledge to adequately engage with and support all staff, including men, regarding mental health and how to spot the signs and symptoms of someone who may be struggling.

Mental health services and training
There are a variety of pathways and services available if you are concerned about the mental health of a male colleague.
We provide one-to-one psychotherapy sessions which allow individuals to discuss their emotions and experiences in a confidential setting. We also deliver mental health training which includes a course on Emotional Resilience and Mental Health Awareness Training for Managers.

For more information on how we can support the men in your organisation, contact us via email: info@mohs.co.uk or phone: 0121 601 4041.